This page lists all the active, full-time members of the Silver Circle. Members are welcome to use the portrait of their character below for their website avatar.

Members on the leadership (administrative) team are marked with an insignia beside their name. See key below to help you find members who can assist you with questions about the guild. 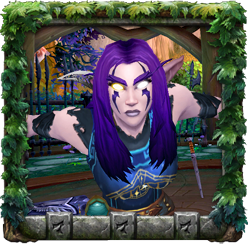 Mentored by the legend of the Ashamane, Allethea exemplifies the Wild God's wanderlust in her travels, studying fauna and people to discover a perfect balance protecting them both. Her mastery of her cat form is well utilized in war-time as well, acting as a courier for important messages, and her claws to defend those not strong enough to take up arms. 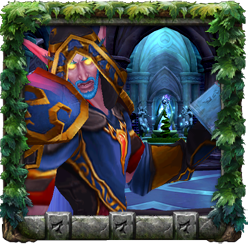 Born in exile, Aneldraen was raised among the people of Eldre'thalas and became a promising student of the arcane. Behind the walls of Eldre'thalas, Aneldraen came to understand the effects and hatred bent towards his kind, due to the mistakes of his ancestors. With the return of the Highborne, Aneldraen hopes to open the minds of those who cast his family away, and perhaps find his place in a world constantly threatened by war. 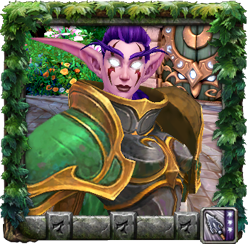 Titles: Second Lieutenant of the Watchers

Athaea was a priestess turned jailor after a series of unforeseen events. It did not take her long to climb through the ranks of the secretive Watchers and she managed to become a fully-fledged warden within a single millennium. In recent years she has made it her focus to fortify the alliance between the Watchers with the Silver Circle. Among the Silversworn, she is largely known for being one of the most resilient and dependable figures. 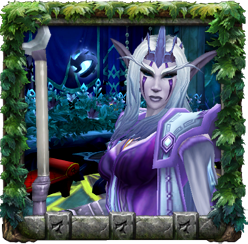 Role: Elder of the Moon

Celassa was born in Winterspring roughly 7,000 years ago. Initially trained to be a sentinel, before long though she found it hard to ‘fit in’ with her fellow Kaldorei. And found her strength through Elune, leading her to become a Priestess. She’s since dedicated her life to following Elune’s command and aiding her people when and where needed. Thus leading her to the Silver Circle. 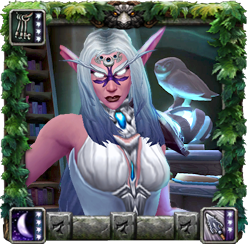 Feyawen Nightfury is an ancient priestess of the goddess Elune, a former commander of the Sentinel Army and the current Keeper of the Silver Circle. Though she serves the Alliance, she values the preservation of the Silver Circle and her people above all else. Her matronly nature and her political connections in the Sisterhood can make her a strong ally or a formidable foe. 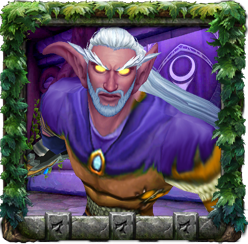 Trained from a young age by the Shadowleaf Sentinels of eastern Ashenvale to become a ranger, Feydren never quite had a normal childhood. He has grown into a serious adult and can be a bit of a loner. Because of that he is easily irritable and sometimes gets paranoid. He is known for being selfish as well, but always means well. He is often out in the field doing Elune’s good work, and trying to stay out of trouble. 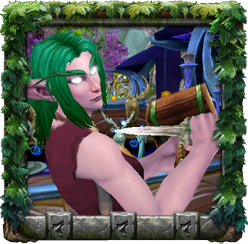 Glynindra Breezebend hopes to follow in her Sentinel Grandmother's footsteps, in making Elune's quest for peace a reality. When not training with a sword and at the forges, she makes a living selling spiritually-charged statuettes in the shape of Wild Gods and Holy Figures. 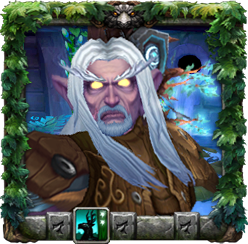 Role: Elder of the Wild

Titles: Druid of the Claw

Kelanthos Ivyfang is a long-time companion of Feyawen Nightfury and one of her closest advisors. While eccentric, Kelanthos’s experience and wisdom has been invaluable in the face of countless conflicts throughout Kalimdor since ancient times. 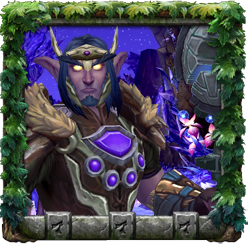 Just a few decades into adulthood, the chaos gripping Azeroth has forced Kelthos to grow up quickly. Optimistic yet pragmatic, he seeks to use his skills to make the world a better place. Recent revelations about his family's connection to the Blue Dragonflight has left the young elf questioning what the inescapable tides of destiny have in store for him. 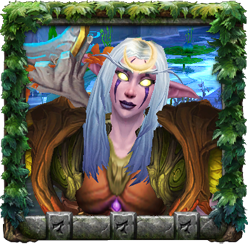 Hailing from the wilds of Mount Hyjal, Luna Moonsaber grew into the adoration of the woodlands. Unable to find it in herself to train in the harsh ways of the Sentinel Army, Luna spent most of her upbringing learning to cook and gather. In time, the lush green wilds of Val'sharah called to Luna and eventually lured her down the path of druidism. Though only a student of druidism, Luna aids the Silver Circle on its ventures throughout Azeroth. 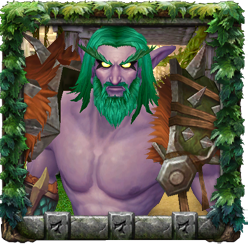 In his early years, Mato’thryn eked out a humble life in Azshara as a hippogryph tamer. He grew to know only loss as wars stole away both family and friends. It was only a matter of time before the Horde would claim anyone else who remained. With the arrival of the Legion, he came to a critical conclusion: his seclusion was over. Mato’thryn joined the Silver Circle and operates to assist the kaldorei and cull any who would threaten them. 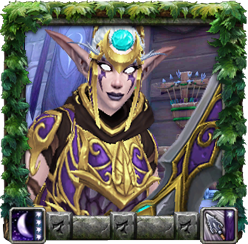 Role: Warden of the Hunt

Mythanil is a former member of the Silverwing Sentinels, she has devoted her life to the service of the Night Warrior and her divine will. Following the events of her traitorous father's death by her hands, Briarblade has shown signs of temperance despite her age. Though she often cannot help but show her youthful exuberance from time to time, she now serves the Silver Circle as one of it's Silversworn, as a capable ally, and worthy opponent to others. 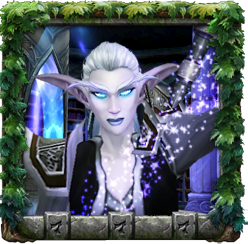 Titles: Guardian of the Arcane

Mythera is a shen’dralar survivor of Prince Tortheldrins tyranny. She returned to kaldorei society alongside her father, Thinius Shadowfern. Though she is often regarded as one of the friendlier highborne, her attitude shifts quickly and can often be undetermined thanks to her sometimes-radical views. Today, Mythera draws her morals and ethical code from experience and wisdom gained from her peers and comrades in the Silver Circle. 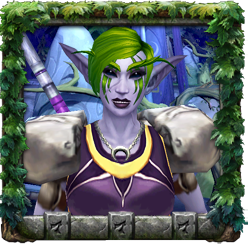 After losing everything she loved to the fall of Teldrassil during the War of the Thorns, the young Sentinel Nadyssa fought a brutal campaign in Darkshore with the Army of the Black Moon. Eventually, seeking more camaraderie than just the kind forged through blood and battle, Nadyssa sought the Silver Circle and their ancient Silver Flame. Now, with little else left, she has sworn to defend the Silver Circle and Elune's Flame to her dying breath. 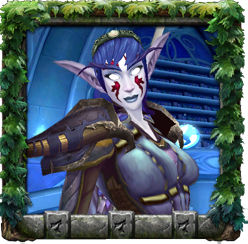 The most significant event in her early life was the unexplained disappearance of her father, a wood-shaper. Raiwe entered the Temple of Elune at the youngest an acolyte could be accepted so her mother could continue the long search for her missing mate. Life at the temple was mundane compared to happened when the Legion came. The death of Ysera impacted Raiwe greatly, eventually urging her further from the nest and into the embrace of the Silver Circle. 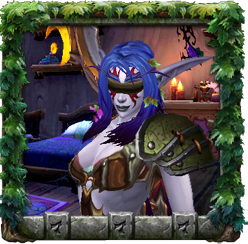 Born and raised in Moonglade, Rhionana Spiralgale has not let blindness halt her ambitions. Abandoned by the Druids of the Moon for her persistence to become blessed by starlight, she now uses her talents as an avian scout for her sisters and brothers of the Talon, going wherever the winds take her and always giving thanks to Elune and Aviana. 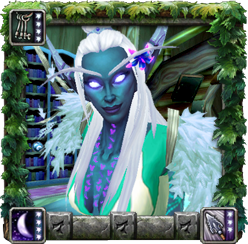 Seldarine Stardragon was raised on stories of the outside world and Elune, by her mother. Born a Shal'dorei of Suramar, this elf intends to honor her mother's memory by exploring the world outside of her city and following the path of the Goddess. Seldarine hopes to one day show other Shal'dorei the blessings of the outside world, and that of Elune. 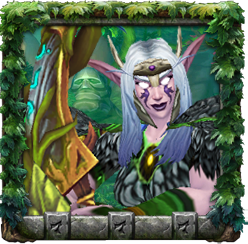 Titles: Ranger, Druidess of the Wild

A lone ranger for most of her life, Sistrina has mostly been self-taught in the ways of survival. Battle-scarred and stoic, she clearly has seen plenty of strife. Sistrina has always shown deep connections to nature, beasts and plants both. A beastmaster until female kaldorei were accepted into the Cenarion Circle, she soon found herself a Shan'do and added to her skillsets. She continues to learn and train, seeking to use all her skills to aide the kaldorei. 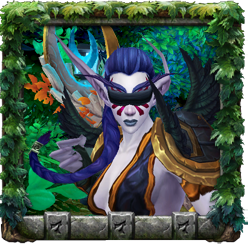 Born to merchant parents in Auberdine, Sylaurane Weathershield had an affinity to the energies of balance that manifested through the powers of the moon, stars and sun. She trained for many years under the Archdruids of Moonglade, and has been a part of most if not all Cenarion outreaches in an effort to do her part to Azeroth and her people. With recent tidings bearing a grim future, Sylaurane aims to regain her strength and fight for her kin. 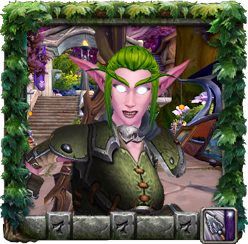 Headstrong, stubborn, and evolving into a jack-of-all-trades, Tanefrun Stormhelm has no shortage of will for survival in the face of any force of evil. Embracing her people and culture which she was separated from for most of her life, along with adopting their more traditional ideals in lieu of how war has shaped her as a person, Tanefrun aims to stay true to her beliefs and fight for what she believes is right. 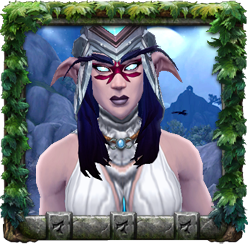 Titles: Priestess of the Moon

A devout priestess and a skilled archer, Therandra’s wisdom, experience, and love for Elune have guided her through countless wars and battles. Loyal to her people and a line of defense in the name of Elune, Therandra aims to stay vigilant and aware of darkness lurking beyond every corner through serving the Silver Circle and it’s cause. 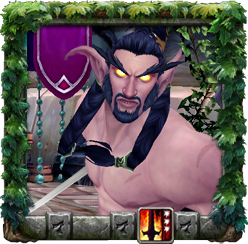 There are scant surviving documents of the Shadowfern line, including the personal history of Thinius. What remains begins some years after the War of the Ancients. He is referenced in the history of Winterspring as one of the first to settle the land following the Sundering, and much later in Shen’dralar records which suggest he was a hero and leader during the Ravenwind uprisings. Today, he serves as the personal bodyguard to the Keeper of the Silver Circle. 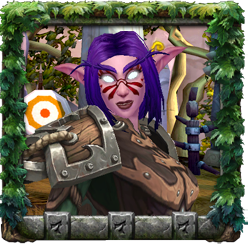 Tralaia had just entered adulthood when the Sundering occurred. Her family was nearly entirely lost, and she spent millennia watching over her druidic sister Aillwind in Ashenvale while she slept. When the orcs came she fought, and met the Alliance, finding them to be strong allies. She rejoined the kaldorei on Mount Hyjal, then officially joined the Alliance just before the next invasion of the Burning Legion sent her to Outland to find new adventures and friends.