EXPERIENCE & LEVELING
As characters adventure, meet new people, learn new things, and overcome challenges, they gain experience, represented by experience points. To begin tracking this experience, set your character's level to 1 and experience bar to 0/3 in your currently or OOC section of your RP profile in-game. Characters who reach an experience point total of 3/3 advance in capability, gaining a level from 1 to 2.

The experience required to cap a level increases as you level up, so be certain to check how much experience you need to gain each time you level!

XP CAP
On any given month your character is relegated to obtain only 10XP in total, players should keep this cap in mind, there is no rush to level 10. This limit resets at the start of every month on the 1st.

EXPERIENCE BY LEVEL
The experience required to cap a level increases as you level up, so be certain to check how much experience you need to gain each time you level!

Characters begin at level 1 and can advance up to level 10. Each time a character levels, specific bonuses are unlocked.

Begin with 10 Attribute Points and one Racial Perk

Choose a Passive perk from the perk list provided.

Choose an Active Perk from anywhere in the Active Perk library and style/re-flavor it to suit your character. (This change can only be thematic and cannot alter any of the core mechanics of the Perk, but it is okay to alter the required skill, however you can only apply a skill requirement based on one skill your character has). Examples below the spoiler line.

Spellbreaker (Original)
Requires: +3 in Arcana or Athletics
Once per event, you can summon an antimagic shell as a reaction to deflect a spell cast upon you. The effect fades after 1 round.

Cloak of Shadows (Reflavored from Spellbreaker)
Requires: +3 in Stealth
Once per event, you unfurl and cover yourself in a cloak of darkness as a reaction to deflect a spell cast upon you. The effect fades after 1 round.

Hungering Strike (Original)
Requires: +3 in Arcana or Athletics
Twice per event, you quench the thirst for power, after landing an attack you can decide to feed your hunger, allowing you to heal for half of the damage you dealt. (Rounded up).

Carnivorous Symbiote (Reflavored from Hungering Strike)
Requires: +3 in Nature
Twice per event, your spells and attacks manifest carnivorous plant life that leech the lifeforce you've relinquished from your foes, after landing an attack you can decide to draw upon your symbiotic bond with the plant life, allowing you to heal for half of the damage you dealt. (Rounded up).

Blade of Truth (Original)
Requires: +3 in Insight or Arcana
Once per event you can imbue your weapon with positive energy. For two turns in a row, you can add either your Insight or Arcana bonus to your attack rolls made with that weapon against humanoid, demonic or undead targets.

Vicious Haikus (Reflavored from Blade of Truth)
Requires: +3 in Performance
Once per event you can unleash a tirade of volatile verses to mock your foe. For two turns in a row, you can add your Performance bonus to your attack rolls against humanoid, demonic or undead targets. 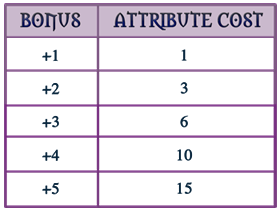 Note: The table reflects the total Attribute Point cost requirement to reach the listed bonuses from a base of 0. For example, to go from a 0 skill bonus to a +5, you must spend 15 attribute points in that skill. This can be done all at once or incrementally over time. To check to ensure you have not overspent your Attribute Point allotment, simply use the calculator to tally the Attribute cost for each of your character's skill bonuses.
SKILL LIST
Acrobatics
A skill of having good balance, agility, finesse and coordination. This skill aids you in walk steady across precarious surfaces, evade a thrown weapon or spell, and flourish your weapon in a really cool but impractical way.

Animal Handling
A skill to help you intuit an animal's intentions, emotional state, calm it down, train it and communicate with it.

Arcana
A skill to recall lore about spellcraft, magic items, eldritch symbols, rituals, magic traditions and the cosmology of the universe.

Athletics
A skill involving the use of physical strength and endurance to overcome physically challenging activities. Hold your breath, march or labor for hours without rest, go without sleep, carry a fallen comrade to safety, grapple an enemy to the ground or even channel a taxing spell for a long period of time.

History
A skill to recall lore about historical events, legends, people, bygone kingdoms, past wars. Possess the scholarly wherewithal to decipher encryptions, interpret texts, solve puzzles, and apply your knowledge for practical use and strategic means.

Insight
A skill that enables you to determine the true intentions of another creature, such as seeing through a bluff or an intimidation. Discern the intended message of a non-verbal communication, read the lips of a creature you can see but not hear, determine if someone is lying.

Intimidation
The skill to influence someone through threats, hostile actions, and physical imposition. Pry information out of an uncooperative prisoner, advise a guard that it might be best to look the other way this time around.

Investigation
The skill to identify and make deductions based on clues. Deduce the location of hidden objects, discern from the appearance of a wound what kind of weapon dealt it.

Medicine
The skill to stabilize the dying, diagnose, and the know-how to treat or find remedies for illnesses such as disease or poisons and magical ailments such as curses.

Nature
The skill to recall lore about terrain, plants, animals, weather and the natural cycles of the world. The skill to follow tracks, hunt wild game, guide others through wild lands, identify signs in nature, predict weather, or avoid natural dangers such as quicksand.

Perception
Sensory skills to see, hear, smell, feel or otherwise detect the presence of something in proximity. Spot a well-hidden object or feature, eavesdrop on a hushed conversation, spot a creature attempting to hide.

Performance
The skill to delight an audience with music, dance, acting, storytelling, magical displays, or some other form of entertainment. Execute an impressive musical display to attract attention, provide routine storytelling around a campfire. This is also a skill that determines whether you can convincingly hide the truth, either verbally or through your actions.

Persuasion
The skill to influence someone or a group of people with tact, social graces, or good nature. Convince a group of thieves to leave in peace.

Religion
The skill to recall lore about deities, spiritual philosophies, rites and prayers, religious hierarchies, holy symbols, and the practices of secret cults.

Stealth
The skill to conceal yourself from enemies, slink past guards, slip away without being noticed, or sneak up on someone without being seen or heard.

Street-Savvy
The skill and know-how to gather information from people, find information in populated areas, blend into the crowd and get a feel for a situation, or discover rumors. This is also the skill to attempt an act of legerdemain or manual trickery, such as planting something on someone else or concealing an object.

SPELL SLOTS
To avoid the trivialization of spellcasting and challenging obstacles in roleplay, characters will have a limited font of power tallied in the form of available spell slots. Every event, spellcaster characters will have a limited number of spell slots based on their class. When a character casts a healing spell, utility spell or an offensive spell with a special effect (such as daze, sleep, freeze -etc), they consume a spell slot. Generic offensive spells such as fireball, smite, or nature’s wrath do not consume a spell slot; however, a caster can decide to turn a failed offensive spell check into a success at the cost of 1 spell slot, dealing 5 damage.