This page lists all the notable affiliates of the Silver Circle, including Circle allies, member alts, and non-player characters (NPCS).

To see active members of the Silver Circle, follow the link below: Titles: Lieutenant of the Sentinel Army

Sarynth Stormglaive is a Kaldorei warrior and a former Commander in the Sentinel Army. Sarynth is a driven and ruthless individual, utterly dedicated to the Goddess. Her love for her people is undeniable, but the way in which she carries herself has put her at odds with many of her kin. Kelyiara Ebonfall, once a faithful servant of Elune, now walks the earth as an unholy abomination whose very existence disrupts the balance of the world. A victim of cruel manipulation, Kelyiara retained her faith in the Goddess, and has willingly chosen to continue her servitude in undeath. Since being saved by the Silver Circle on a mission of theirs, Sister Nightshadow has decided to become an Ally of the Circle. She is rather small for her height, and is an albino, with very pale skin and washed out lavender hair. Snowy as her friends call her, is always willing to help those in need. Her eyes look wise and weary as if she has seen many things. 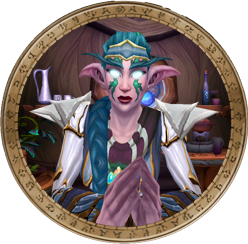 Priestess Saracia Rivermoon was once dedicated to a secluded life of meditation and study, but when Deathwing destroyed her shrine, permanently scarring her body, she was mysteriously saved by those same flames. Crippled but recovering, she has long sought the answer to this miracle only to be met with more mystery. With her Moonsaber mount Lakshi, Saracia was given the post of Anchorite at Lor’denal but her drive for answers pushed her to the service of the Silver Circle. 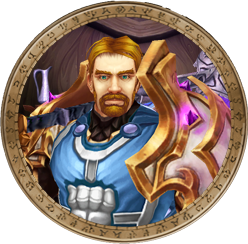 Hailing from Lordaeron, Bruno voyaged to Kalimdor on a pilgrimage of sorts to find his redemption. It was found first among Commander Wintershade’s Sentinels. Then secondly with the Silver Circle who helped him spiritually and gave Bruno purpose, he to this day continues to help and protect his friends to the best of his abilities.