The past is certain, the future obscure. Those who walk the Path of War understand this, for they have been charged with the defense of the Kaldorei nation. Walking this path is to hold the value of another’s life in your hands, to know when it is necessary to strike or defend. Preparation is imperative, and the students of war focus on perfecting their occupation to ensure they are never unprepared. Regular exercise of both the mind and body is something to be expected.

Members of this path defend the land, life, and the Kaldorei, never turning to conquest unless it is essential. More often than not adept students of war join the Sentinel Army or become domestic peacekeepers.

On the wheel of the year, the Path of War corresponds with the Autumn season. Autumn represents the preservation of life, the final harvest and time for preperation. The New Moon lunar phase shares an attunement with the Path of War and the Autumn season. This lunar phase symbolizes a time to set intentions, to make declarations, and to take action.

I shall honor the tenants of war, to yield to the goodness of peace, and grant silence to those who betray it.

I will quiet the weaknesses of my heart, and wield my blade with courage and virtue to defend the helpless.

My wrath will be Her arrow, to undo the wickedness and evils that threaten the Balance.

This, I vow in the name of Elune and the Kaldorei.

Law of Peace
The Goddess is peaceful but not pacifist. Aid those who seek redemption before they are put to the blade. Strive for peace in the pursuit of Her will and resort to violence only when necessary.

Law of the Night Warrior
Elune’s enemies will try to break your compatriots will with terror and corruption. Seek them out and cleanse them from Azeroth, for they are an affront the Balance.

Law of Wisdom
Your heart and mind must stay clear, for eventually you will be forced to admit defeat. While most beings can be redeemed, some are so far along the path of evil that they must be put to an end. Any such action must be carefully weighed and the consequences fully understood. 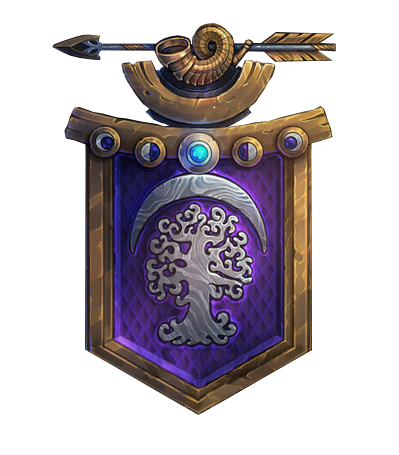 “We fight in the name of Elune so that Her vision may come to pass. We go to war, so that She need not...”
- Warden of War

Student of War
The Student of War (Thero’theral) is a novice of the path. They learn to grow with assistance of others and by their own determination. This title is earned after pledging to follow the Path of War during Council Glade, and is maintained through attaining the first path seal.

Moonshadow
Moonshadow (Lune’shalla) is a title bestowed upon students of war who have refined their training and prepared for service in Elune’s name. They valiantly pursue Her will and protect Her children and exercise the tenants of war in all they do. This title is earned after attaining 2 seals in the Path of War.

Silver Shield
Silver Shield, or Silver Guardian, (Isil’nar) is bestowed upon Moonshadows that have begun leadership training and learned to apply their skills and knowledge to mentor others. They recognize that peace is not simply won, and they do what they can to preserve peace and themselves by taking supportive action when necessary. This title is earned after attaining 3 seals in the Path of War.

Blade of Elune
The Blade of Elune (Elun’serrar) is an experienced and capable leader in the path of war. These path veterans have completed their training and work to assist the Warden of War with preparing and leading the Circle into battle. This title is earned after attaining 4 seals in the Path of War.

Only the Blades of Elune (Elun’serrar) can complete the final task in the Path of War, to earn their unique title.

Warden of War
The Warden of War (Anala’thera) is the experienced master of the path. There is only one Warden of War in the Circle at any time, and they are responsible for overseeing the path and assigning various tasks affiliated with their path. This title is earned by an exemplary member of Path of War, who has gone above and beyond to aid the Circle and demonstrates a strong sense of leadership and devotion to others. The Warden is specifically chosen to lead the path. This position is currently held by interim Guardian of War, Thinius Shadowfern.

The Path of War philosophies are strongly rooted to the constellation known as Elor’thorala, the Eternal Warrior. The constellation is of an ambiguous kaldorei fighter and is a widespread symbol of vigilance, valor, and tenacity for all kaldorei.

Hovering over the stars on the constellation will display tasks associated with the Path of War. The bottom-most star is the introductory task and must be completed before you can move on to new tasks linked with that star. You can only complete tasks that are linked to stars you have already completed. Excluding the introductory task, one path seal is earned for every three tasks you complete.