Followers of the Path of the Moon (also referred to as the Moonlit Path) are devoted to scholarly pursuits. They are practitioners of magic, scholars, spiritualists, healers, diplomats, and politicians. Many engage themselves in societal affairs, organizing respectful debates, cultural events, and religious ceremonies.

Elune is strongly rooted in this Path. She is the mother of all life and has a hand in the creation of society, freethinking, and faith. Because of this, the leaders of the Moonlit Path are often priestesses, submissive devotees of the Goddess who seek to use their knowledge and power to guide and protect the Kaldorei people. It is for this reason that the practices and teachings of the Goddess are heavily present.

Any class can follow the Path of the Moon, though more commonly priests, mages, druids, and monks make up the majority.

On the wheel of the year, the Path of the Moon corresponds with the Winter season. Winter represents letting go of painful experiences, solitude, grief, restoration and hope. The Full Moon lunar phase shares an attunement with the Path of the Moon and the Winter season. This lunar phase symbolizes a time to be receptive, awareness, spirituality and seeking fullness in life.

In Her name and by Her will I vow to respect and follow the guidance of the High Priestess. To offer my aid and insight to my kin. To respect and spread the teachings of Her will by direction of those appointed by Mother Moon. Those who seek ill of my kin, those who wish us harm will be met by me, this I vow.

I am an instrument of her fury and wrath to be directed against Her enemies. I am a healer, a caretaker and a guardian. I offer my hands in care to those hurt in service of Her. Mending of bone and spirit to the best of my ability. I am conduit to Her ears, a vessel of Her love and understanding.

Her lessons and teachings are my own. I give them humbly and truthfully. These I swear to hold and keep. May Her light guide my steps and direct my hand.

Law of Leadership
Honor the High Priestess who embodies Her will. Guide your brothers and sisters on the moonlit path. Your first and foremost goal is to learn and spread the teachings of the Goddess.

Law of Devotion
Her vision will be opposed. Meet Her enemies in battle, and strike them down with the wrath of the Goddess.

Law of the Healer
Offer succor and receive love. Mend the broken and offer spiritual guidance to those in need. 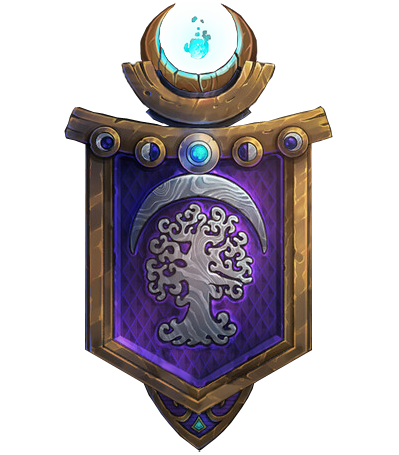 “She lifts us so that we may lift others...”
- Elder of the Moon

Serene Student
The first rank of the Path of the Moon is the Serene Student (Thero’aminor) Typically those who are embarking on the moonlit path are interested in strengthening their spiritual awareness. This title is earned after pledging to follow the Path of the Moon during Council Glade, and is maintained through attaining the first path seal.

Brother/Sister of the Moon
Brother or Sister of the Moon (Lun’falore/Lun’dalora) have progressed past the initial arduous obstacles of addressing their spiritual awareness. And have chosen to further develop their understanding of faith. This title is earned after attaining 2 seals in the Path of the Moon.

Light Watcher
The Light Watcher (Adala’ethella) has established themself in the eyes of the Goddess and their peers. They are responsible for continuing their studies under the teachings of Elune as well as furthering the development of their faith. This title is earned after attaining 3 seals in the Path of the Moon.

Honored Moon
Marked by the effulgence of their discipline and faith, those who earn the title of "Shanil’lune'' or "Honored Moon" have proven their fidelity to the Goddess. They offer counsel to the Elder of the Moon and assist in guiding the Circle in spiritual matters and lend aid to those embarking on the Path of the Moon. This title is earned after attaining 4 seals in the Path of the Moon.

Only the Honored Moon (Shanil'lune) can complete the final task in the Path, to earn their custom title.

The moonlit path follows the constellation course (path?) of the first High Priestess, Haidene. The first Kaldorei to hear the Goddess and spread Her teachings. Just as Priestess Haidene took to the skies to assume her place amongst the stars as a demigoddess, followers of the path of the moon ascend to their higher self. Uplifted by their own strength and Elune.

Hovering over the stars on the constellation will display tasks associated with the Path of the Moon. The bottom-most star is the introductory task and must be completed before you can move on to new tasks linked with that star. You can only complete tasks that are linked to stars you have already completed. Excluding the introductory task, one path seal is earned for every three tasks you complete.